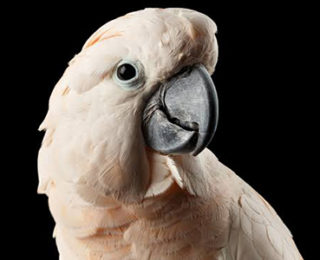 Goffin cockatoos are very popular birds since they are very intelligent as well charming and playful. Most people like keeping them as pets because they are very interesting species. They always do many activities. So they are not boring creatures. Looks like that they like to be kept outside the cage. However, their complex and difficult behaviours are most concerned by those who interest to have them as pets. Their complex and difficult behaviours include screeching aloud, bite and peck anyone considered to be strangers by the birds. For those who like challenges, keeping them as pets is a good choice, isn’t it? Goffin cockatoos are the smallest one among cockatoos. One of the most glaring features of goffins is their shorter crest on the head than other cockatoos. The crest will uniquely stand up when frightened or get excited.

Goffin cockatoos belong to the parrot family. Their scientifc names are Cacatua goffini. Most of them have a natural white or pink color. Their feathers color between the eyes and the beak are mostly pink or salmon, and so is the crests. You can’t see the crests unless they are extended. It is because the crest is hidden by the feathers. The size of the crests are pretty small, and they can be lowered or raised.

Goffin cockatoos are known for their intelligence. Though they cannot talk like us, but we can teach them to say several words. Training them is so difficult that it takes time and patience. When you want to train your cockatoo, give your goffin what he wants most first. If they have been used to you, you can then challenge their intelligence by stimulating his problem solving skills. Trouble will arise if you make your goffins bored.

That’s why, always make him busy and active. And the last, build a bond of trust between you and your goffin. It will happen if you spend most of your time with him. Bond of trust will make him happy and being loved. Show your love to your goffin cockatoo.

Female Cat Names that Start With the Letter V

Male Cat Names that Start With the Letter J

The Best Ideas of Fashion For Dog Dress