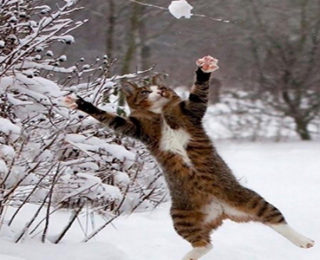 If your cat was born in the winter, or if your cat is one of a winter-loving cat breeds, a winter-themed cat name could be the perfect match. Here is a list of cute and cool winter cat names. Below is a list for you to start with ordered alphabetically. We hope you will find just the right winter female cat names or winter male cat names for your pet.

Alaska: This state is known for its snowy white terrain.
Alba: bright white
Alcyoone: Greek: Alcyoone was a Goddess, who threw herself into the waves when her lover washed up on the shore, so that she might join him in death. She was reborn as a Kingfisher, and in some accounts so was her lover.
Amaterasu: Japanese: Amaterasu ruled over the heavens until her brother, Susanowa, challenged her. The winner would be the new ruler of the kingdom of heaven.
Aspen
Aster
Aubin: French for “snow”
Avalanche: action-packed snow name.
Balder/Baldur: Norse: Baldur dreamed of his own death, and his mother, Frigga, went out and begged nature not to harm him. Unfortunately, she overlooked the humble mistletoe. Loki (a notorious trickster) took note of this.
Bianca: means white
Blizzard: A blur of white, just like your cat.
Boand/Boann: Irish: Boand was seen as the woman of white cows, or shining cow, or the Cow Goddess. She also gave up her name to the river Boyne.
Bona Dea: Roman, Greek, Celtic: Roman women would gather in early December at a secret temple on Aventine Hill in Rome to hold an ancient ritual.
Boots
Carol
Chili
Chilly: cute sounding name for the cold.
Cloud: Another white fluffy thing.
Coco
Colden
Cole
Cortina: Ski Resort
Crimson
Crispin
Crystal
Cypress
Darke 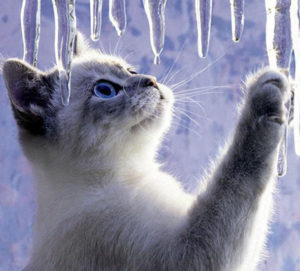 Demeter: Greek: A title well earned for Demeter was ‘Dark Mother of Winter’ and for many reasons. First off, she was just as famous as Hera in terms of her temper. In more than one account she turned people into lizards when they dared to joke about her or her children.
Demi: Short for Demeter
Ebenezer
Eirwen: Means “white as snow”
Ember
Estonea-pesta: North America: Known as the Lord of Cold Weather, he was responsible for providing protection to Sacred Otter by giving him a Snow-lodge.
Everest: Mount Everest, the Earth’s highest point, is recognized for its white-capped mountain top.
Flurry
Frost
Frostine
Frosty: A cute name that pairs perfectly with a white cat.
Gabby
Gabriel
Garnet: January birthstone
Glover
Himesh: Hindi for “Snow King”
Holly
Ice/Icicle: Cool and cute at the same time.
Icelynn
Igloo
Ivy
Jack
Jack Frost: Wintery & proper sounding name.
January: Named after the super cold, often snowy month.
Jay: winter bird
Lion in Winter
Lucia: Saint of Christmas
Lumi: Finnish for “snow’
Lunar/Luna: A trendy name that is perfect if your cat has a bit of a silver-ish tint.
Misty: Mist is often white and flowing.
Nevada: Means “snowfall”
Neve: Latin for “snow”
Nicholas
Nimbus: Like the white rain cloud.
Noel
North
Olwen: means “white footprint”
Paloma: Means “dove”
Parka
Plow
Polar: Like those adorable white polar bears.
Pothole
Robin: A winter bird
Rosemary
Santa
Santos: Latin for saint
Sky: At times the sky is clear and pale in color.
Sleigh

Male Dog Names that Start With the Letter R

Beautiful Girls with Their Horses

Female Dog Names that Start With the Letter L

Male Cat Names that Start With the Letter K