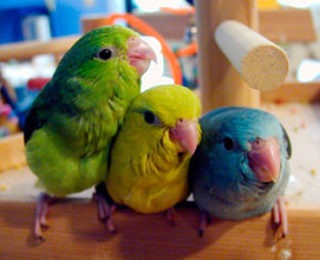 African Greys: The African grey’s intelligence, sensitivity and quiet nature were some of the traits readers named as the reasons why they are the favored bird.
Amazons: Amazons can vary between species, though, when it comes to talking and singing abilities.
Budgerigars: The fans of these birds remarked on their playfulness, their affectionate nature and that they were easy to maintain and cost much less than other birds.
Caiques: They enjoy playing on their backs, hopping around the house and just being comical.
Canaries: Canaries are known for their beauty and their song and have been kept as pets since the 1400s.
Cockatiels: This bird was a favorite with both beginning bird owners and experienced birdkeepers who still could not resist their charms. Cockatiels are sweet, personable, easy to care for, intelligent, fun, and all around great family pets.
Crows: A crow is a bird of the genus Corvus.
Eclectus: The male and female Eclectus are so different looking that they were originally thought to be two different species.
Finches: These birds are known for their beauty and some are able to sing.
Hawk Headed Parrots: The Hawk Headed Parrot is a unique pet bird much like the Caique.
Large Cockatoos: If you own a Cockatoo, then you know why they are called the “love sponges” of the parrots.
Large Conures: Green-cheeked Conures are actually good first birds and are quiet enough to live in an apartment with you.
Large Parakeets: The different types of these pet birds are so different from each other that it is difficult to describe them as a group.
Lories and Lorikeets: There is no scientific difference between the two names–only that Lories have shorter tails while Lorikeets have longer tails.
Lovebirds: These birds are great pets for older children but may be a bit too nippy for younger children.
Macaws: These birds are very intelligent and can learn to talk and learn tricks very easily.
Mini-Macaws: The Macaw is the largest of the pet birds and is a very popular pet.
Mynah Birds: The myna (also known as mynah) is a bird of the starling family (Sturnidae). This is a group of passerine birds which are native to southern Asia, especially India.
Parrotlets: These birds are the smallest parrots kept as pets and they have about the same size personality as an Amazon.
Pigeons: Pigeons are incredibly complex and intelligent animals. Want to name your cute pigeon. Look Here: “Pigeon Names“
Pionus Parrots: Pionus look like small Amazons and they both have similar traits. Pionus tend to be quieter and not as agressive as Amazons.
Poicephalus: The parrots that are part of the Poicephalus genus are playful and entertaining.
Small Cockatoos: These birds make great pets, but only if you are an extremely experienced bird owner.
Small Conures: Conures are active birds that can be quite loud. They need more experienced bird owners and most are not suited for apartment living, except for one.
Small Parakeets: One of the best known in the U.S. is the Budgerigar (Budgie).
Toucans: Toucans are members of the family Ramphastidae of near passerine birds from the Neotropics. The Ramphastidae family is most closely related to the American barbets.

Male Dog Names that Start With the Letter Q

Romantic Names to Call Your Boyfriend

Male Dog Names that Start With the Letter D