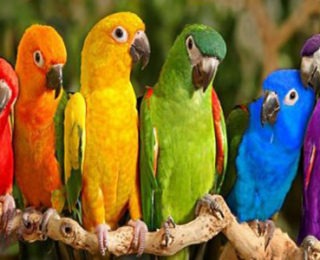 We have famous, cute, cool, interesting, beautiful and popular male parrot and female parrot names. Whether you are looking for a name for our feathered friend or are just browsing, here’s a list of the most beautiful parrot names on cuteanimalnames site. We are waiting for your comments and your suggestions.

Abalardo: A very big parrot, Big Bird’s Mexican counterpart on Plaza Sesamo
Alex: Man’s defender; warrior(Greek)
Alkonost: A bird of paradise with the body of A bird and the face of A woman, A derivative of Alcyone.
Angel: Angelic; messenger of God(Greek)
Ba
Babie: Young, often symbolizing innocence or purity; object of affection(Old English)
Beau: Beautiful; sweetheart(French)
Bennu: The Egyptian correspondence to the phoenix, and is said to be the soul of the Sun-God Ra.
Buddy: Friend; brother(English)
Camulatz: A bird that ate the heads of the first men.
Casper: Master of the treasure(Chaldean)
Chamrosh: A bird said to live on the summit of Mount Alborz and is the archetype of all birds
Charlie: Manly; strong; free(English)
Chloe: Blooming(Greek)
Coco: Help(Spanish)
Dahl: Household pet of the Kennedy family in the Australian soap-opera Neighbours
Daisy: Eye of the day; synonym for Sun(English)
Dolores
Fenghuang: Mythological birds that reign over all other birds.
Firebird
Fred
Gabby: Heroine of God(Hebrew, Italian)
Gamayun: A prophetic bird that lives on an island in the east, close to paradise
Garuda: A lesser Hindu divinity, usually the mount (vahanam) of Vishnu.
Gracie: Favor, blessing(Latin)
Griffin: A legendary creature with the body of A lion and the head and wings of an eagle.
Harley
Harpies: Winged death-spirits.
Ho-o: Japanese version of the Chinese Fenghuang.
Hokhokw
Hraesvelg: A giant, who in eagle from, creates the wind by beating his wings.
Hugin and Munin (Thought and Memory): A pair of ravens associated with the Norse god Odin.
Iago: A parrot from Aladdin
Jatayu: A demi-god who has the form of A vulture.
Ju-jak
Kin-u
Kiwi: A fuzzy, tart fruit (Polynesian)
Kwakwakalanooksiwae
Lightning Bird: A real or imaginary bird superstitiously associated with special powers, generally lightning.
Lola: Sorrowful (Spanish)
Lucky: Fortunate(English)
Mac
Mango: A bright, tropical fruit(Portuguese)
Marguerita
Max: The greatest(Latin)
Merlin: Sea fortress; A mythical wizard(Welsh)
Moe: Saved; love(Hebrew)
Morgan: Great and bright sea dweller(Welsh)
Paco: Free(Spanish)
Paulie: in the film of the same name
Peaches: A sweet, flavorful fruit(Persian)
Pepper: A hot spice(Malayalam)
Phoenix: A mythical sacred firebird.
Pisia
Quetzalcoatl: A god of wind, creativity, and fertility, frequently depicted as A Feathered Serpent.
Rainbow: Symbol of hope and beauty. Biblically, it represents the covenant between God and His people(English)
Raven: Representative spirit of actual ravens, and often depicted as A trickster or culture hero figure
Rio: River(Spanish)
Roc: An enormous mythical bird of prey, often white, reputed to have been able to carry off and eat elephants.
Rosita
Ruby: A bright, precious gem(Latin)
Samjoko: A 3-legged bird associated with the sun.
Sammy: Heard God(Hebrew)
Sampaati: Brother to Jatayu.
Shang-Yang
Simurgh: A gigantic, benevolent, mythical flying creature, often part dog or human.
Sirens: Female figures that lured sailors to their death with their music.
Sirin: A mythological creature with the head and chest of A beautiful woman and the body of A bird (usually an owl).
Skittles: A sweet, small, round candy(English)
Smokey: Smoke-colored(American)
Sphinx: A unique demon of destruction and bad luck represented as A winged lion with A woman’s head.
Spike: Sharp metal. A name commonly associated with danger; the name has cool connotations(American)
Sunny: Brilliant, cheerful, happy(English)
Sunshine: Term of endearment; happy, cheerful(English)
Suzaku: Japanese version of the Chinese Vermillion Bird.
Swan Maiden: A mythical creature who shapeshifts from human form to swan form.
Tango: A sultry, upbeat Latin dance or music(Latin)
Tecumbalam
The Cu Bird (el Pájaro Cu)
Thunderbird: An enormous bird that causes thunder and stirs the wind from the beating of its wings.
Tiki: Waterfall(Japanese)
Tookie: Colloquial for “buttocks.” (English)
Waddlesworth: A parrot in 102 Dalmatians
Xecotcovach
Yatagarasu: A 3-legged raven who belongs to the sun goddess Amaterasu.
Zhar-Ptitsa: A magical glowing firebird from A faraway land
Zhu Què (Vermilion Bird): A mythological spirit creature of the Chinese constellations
Ziz: A giant bird said to be large enough to be able to block out the sun with its wingspan.

A Good bird name is Pine

Female Cat Names that Start With the Letter H

Bring and Teaching Your Cockatiel

How To Build a Lovebirds House

Female Dog Names that Start With the Letter H