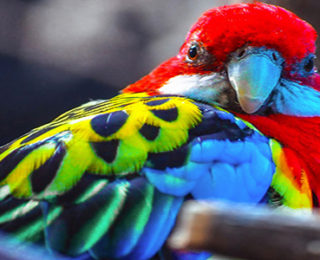 Scarlet macaw also known as Ara Macaw is a very attractive bird will full colors all over its body. They live at almost all of the American tropics where the forest is humid evergreen. The population is now very rare and and suffer from extinction, it’s all because their beauty so people capture them and trade them in black market. And what makes them become extinct is the destruction of their habitat. They live from south eastern mexico to Amazonian peru, also Bolivia and brazil. Their population still can be found at the national bird of Honduras also known as Coiba.

Scarlet Macaw is a cute and colorful bird with length about 81 centimetres. And among other macaw birds, the scarlet macaw has larger tail than the other large macaws. Its body cover with very nice scarlet plumage but the feathers of its tail are light blue. Its wings covert with very beautiful yellow feathers, but the upper side of the filght feather are dark blue. This color makes them so unique and beautiful. But some scarlet macaws have a little bit different in the wings, as they have green color in their feathers.

How do we distinguish between young scarlet and adult. The only different between young and adult is young macaws have dark eyes and the adults macaws have light yellow eyes. Scarlet macaws is very unique birds, they always make a very loud noise especially when they fly together with their groups. But because of its beauty and intelligent people also make thes as pets in many many countries. And to train them is not so difficult, especially if you have them since baby. Baby scarlet macaw is easy to train, and you can let them outside the cage if they already knew you. It can be done if you have them since baby.

What to Eat Scarlet Macaw

Just like other macaws, scarlet macaws mostly eat seeds, including large and hard seeds, fruits and nuts. Usually we can see them in the most of the forest on the canopy of the three. But we can also see them on the ground looking for fruits or seeds.

When they ready to birth usually they lay their eggs, maybe two or three eggs in a tree cavity. They will looking for the safest tree to lay their eggs so they kept the eggs safe from predator. It takes about five weeks for the female to incubate the eggs. And the baby will leave the nest after 90 days of hatching, but it still make them so dangerous to go out the nest.

The habitat of Scarlet Macaw is in the humid rain forest, savannas, river edges and open woodlands of central and south America. You can find them in Mexico through Panama but also you can find them through Guatemala and Belize and scarlet macaw also can be found on the island of coiba.

Scarlet macaw is very beautiful bird, if you like them and want them to survive, you can start buy not buying them from illegal market. You can start saving them by let them live in the wild. I love scarlet macaw.

What Do Crabs Eat

Female Cat Names that Start With the Letter A

Male Dog Names that Start With the Letter W