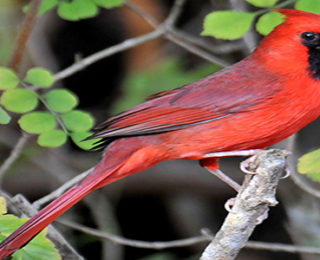 Cardinal birds are found in North and South America, included in the family of passerine birds. This bird looks strong, robust, and it becomes the mascot of University of Louisville, and maybe becomes the inspiration of the normal and Big Brother bird in Angry Birds computer game. The bird has strong bill to eat seeds. The size varies from small (about 12 cm) with light weight (11.5 grams) named the Orange breasted bunting, to the big Black Headed Saltator (25 cm, 85 grams). 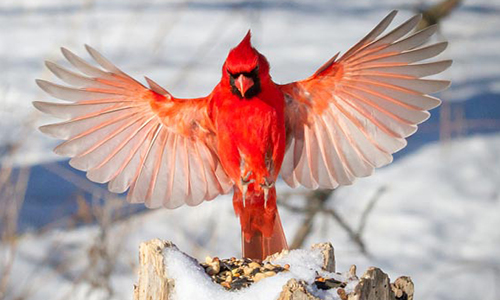 They are named cardinal bird since their red colored feather in male birds, like the cardinal’s vest. Brighter red means faster getting female to mate. Cardinal bird also has black face feather and erecting fur like a crown. According to IUCN rate, they are classified least concern, and near threatened for some species. Cardinal bird also known as active song birds and their species sings various melodies. This is like the manner of communication between male and female.

Male cardinal bird can be aggressive when it comes the time to protect their territory, and their strong beak can attack intruding other males. This can explain why they often attack windows since they think the reflection as the enemy. Cardinal bird, like the lovebird are monogamous; the male will feed the partner while they incubate three eggs per season.

Cardinal bird is an omnivore bird, means it eats anything; insects, grains, seeds, fruits etc. and look for them at dusk and dawn. They can live up to 15 years in wild / natural environment. Both male and female can sing, and the female sing her song from the nest. The male and female have clear voice, and you can interpret them into several phrases. Male cardinal also sings to warn the birds intruding his territory. They usually nest in low tree branch or low bush.

Cardinal females, are unlike the red feathered males, have tan feather with slight red on wings or tail. Cardinal juvenile are more like their mom, all tan feather. If it is male then the red will appear when they grow mature. Baby cardinals are born from white colored eggs with brown spots on it. You can find this bird in United States, especially in states like North Carolina, West Virginia, Illinois, Kentucky, Indiana, Ohio, and Virginia.

You can group them into five clades. They are masked, blue, ant-tanager, chat and pheucticus clade.

the Northern Cardinal the State Bird of Seven U.S. States

What Can My Cat Not Eat? Toxic Food For Cats

Male Cat Names that Start With the Letter Q

Female Dog Names that Start With the Letter O

Male Cat Names that Start With the Letter W