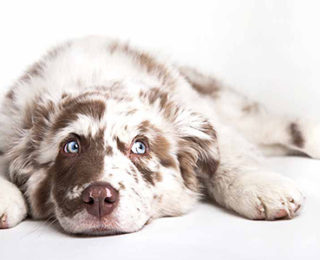 There are many good dog names that begin with Sh, but the name Shep seems to be especially popular, particularly for farm dogs and breeds that were traditionally used for herding. Some dogs may prefer the gentler sound of “sh” at the beginning of their name, finding it less startling or more soothing than a name that starts with a hard consonant sound. The best way to find great dog names for your new puppy or your newly adopted dog. We have detailed below our selection of male dog and male puppy names that start with Sh.

Shad: A name meaning happy in Arabic
Shadow
Shadowfax
Shadowkins
Shadrach
Shadrack
Shady
Shaggy
Shaggydog
Shagnasty
Shai: Hebrew and Aramaic name meaning gift
Shailen
Shailesh
Shaka
Shakar
Shaker
Shakespeare
Shalabh
Shalam
Shalin
ShamWow
Shamgar
Shamos
Shamrock: A short green plant with lobed leaves, finding one with four lobes, known as a four-leafed clover, is considered lucky
Shamus: Anglicized form of the name Séamus, an Irish Gaelic name meaning supplanter
Shan: A Chinese name meaning mountain
Shandy
Shane
Shankar: A Hindu name that means one who brings happiness and prosperity
Shanker
Shant: A name that means thunderbolt in Armenian
Shantanu
Shaq: A shortened form of the name Shaquille, meaning handsome; moniker of one of the greatest basketball players in NBA history
Shar
Sharad
Sharif
Shark
Sharky
Shashi: A name that means moon in Indian and having a hare in Sanskrit
Shashwat
Shaw: An English surname meaning copse or woods
Shawmut
Shawn: A name meaning God is gracious in English
Shaydon
Shazam
Shea: An Irish surname that means hawk-like
Sheik
Shelach: A Biblical name that means a missile or weapon
Shelby
Sheldon: An English and Anglo-Saxon name meaning from the hill on the ledge or valley
Shelley
Shem: A name meaning conspicuous position or renown, also the name of the first named of Noah’s sons in the Bible
Shemai
Shemp
Shemus
Sheng: A name meaning victory in China
Shep: An occupation or breed name referring to a shepherd
Shepherd
Sher: A Persian name meaning lion
Sherbert
Sheridan
Sheridon
Sherif: An Arabic name meaning eminent, noble, or highborn
Sheriff: A keeper of the law and peace
Sherlock: The name of a famous literary detective, Sherlock Holmes
Sherman
Sherwood
Shifty
Shigekazu
Shiloh
Shin: A Korean name meaning faith and trust
Shine
Shiner: A slang word that refers to a black eye
Shinichi
Shipley
Shippo
Shiro: A Japanese name that means the fourth son
Shishir
Shiv
Shiva: One of three main gods in Hindu religion, responsible for the destruction that is required before rebuilding
Sho: A name that means soar and glide or prize and reward
Shogun
Shoichi
Shooter
Short Stack
Shortnround
Shorty
Shot
Shotgun
Shovel
Showboat: The act of excessive showing off, or an individual who has a tendency to show off
Shrapnel: Fragments of a bomb or the shell of a bomb that are forcefully dispersed by an explosion
Shredder: An individual or a machine that shreds, a slang word for snowboarder, or an arch nemesis of the Teenage Mutant Ninja Turtles
Shrey
Shug: A colloquialism of sugar or a pet form of a medieval Scottish name Huchon, meaning heart, mind, or spirit
Shuichi
Shulamith
Shunichi
Shunnar
Shvetank
Shyam
Shylock: A name meaning white-haired utilized by William Shakespeare for the name of an antagonistic moneylender in the Merchant of Venice

Male Cat Names that Start With the Letter C

Male Cat Names that Start With the Letter B

Male Cat Names that Start With the Letter A

Male Dog Names that Start With the Letter Z

Female Cat Names that Start With the Letter Q