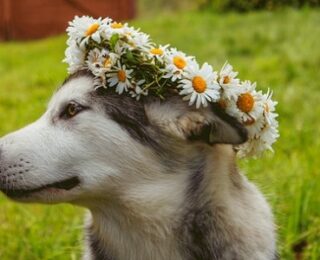 Choosing a mythical dog name for your female pup is an excellent way to celebrate her spirit and to ensure she’s always viewed as the celebrated being that she is. No matter which color, shape or type of female dog you have, we’re sure to have a name to suit. In this article, we have compiled a list of mythological female dog names, cool female dog names that you can give your female dog.

Acacallis: Acacallis was the daughter of Minos, king of Crete, and Pasiphae the daughter of Helios, or Crete the daughter of Asterion. She was the sister Ariadne, Androgeus, Deucalion, Phaedra, Glaucus, Catreus and Xenodice.
According to a Cretan mythological tradition, she bore a son to Hermes, Cydon, the founder of Cydonia.

Artemis: Goddess of the hunt.

Athena: Athena is the goddess of handicraft, warfare and wisdom. Her major symbols include helmets, olive trees, owls, snakes and spears. She is the daughter of Zeus and Metis.

Aura: Goddess of the breeze.

Bellona: Bellona is the goddess of war. She is normally depicted wearing armor and a helmet and armed with either a sword, a spear or a shield, as well as a torch.

Cassandra: Cassandra was a mortal princess in the city of Troy. She is the daughter of King Priam and Queen Hecuba. She is said to have had the gift of prophecy and was also cursed by Apollo and in turn, no one would believe her accurate prophecies.

Daphne: Daughter of the river god.

Diana: Diana is the Roman goddess of the hunt and of nature, making this name ideal for a hunting dog!

Fortuna: Fortuna is the goddess of fate, fortune and luck. She is associated with both good luck and bad luck. Fortuna is often depicted with a horn of plenty, a ship’s rudder and a wheel of fortune.

Harmonia: Harmonia is the immortal goddess of harmony and concord. She is either the daughter of Ares and Aphrodite or Zeus and Electra.

Hera: She is, after all, the Queen of the Gods! She’s also the goddess of marriage and the sky: including all the stars in it.

Iris: Goddess of the sea and sky.

Luna: While the name was made popular by Harry Potter, as mentioned above Luna is the Roman goddess of the moon.

Maia: Maia is the goddess of the spring and plants, as well as mother to Mercury: the messenger god.. This is one of my favorite Roman female dog names, and I love it for a motherly breed, like the Collie.

Minerva: Minerva is the goddess of arts, crafts, trade, strategic warfare and wisdom. She is the daughter of Jupiter and Metis.

Nike: A lot of people think Nike is a masculine name, perhaps because the shoe brand is popular among male athletes. However, Nike was actually a Greek goddess.

Nyx: Goddess of the night.

Phaedra: Phaedra was the daughter of Minos and Pasiphaë of Crete, and thus sister to Acacallis, Ariadne, Androgeus, Deucalion, Xenodice, Glaucus and Catreus and half-sister to the Minotaur. She was the wife of Theseus and the mother of Demophon of Athens and Acamas.

Rhea: Goddess of fertility and motherhood.

Selene: Selene is the goddess of the moon. Her major symbols include chariots, cloaks, crescents and torches. She is the daughter of Hyperion and Theia.

Thalia: Thalia is the goddess of comedy and idyllic poetry. She is one of the 9 Muses and is the daughter of Zeus and Mnemosyne. This name is just perfect for a goofy or playful girl, like the Papillon.

Venus: Venus is the goddess of beauty, desire, fertility, love, prosperity and victory. It has been said that she was born from the foam of the sea shore.

Vesta: Vesta is the virgin goddess of the hearth, home and family. She is the daughter of Saturn and Opis. Vesta is also the sister of Ceres, Juno, Jupiter, Neptune and Pluto.

The Best Ideas of Fashion For Dog Dress

Beautiful Girls with Their Dogs

How Do I Find the Right Name for My Dog

Beautiful Girls with Their Cute Horses

Female Cat Names that Start With the Letter R

Female Cat Names that Start With the Letter D