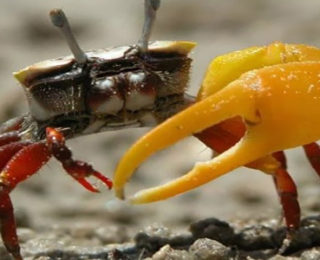 The natural habitat of the vampire crab is in Southeast Asia (especially Sulawesi) near rivers and lakes, while the fiddler crabs (Uca) occurs in almost all tropical areas of the Atlantic and Pacific coast and therefore requires seawater. This makes the attitude of the fiddler crabs (Uca) a bit more demanding, but as far as the necessary salt water is provided, it can also be kept excellent and with a simple degree of difficulty in the aquarium.

Both crab species are predominantly on land, which is why they need a large area of ​​land in their aquarium (see crab attitude). Nevertheless, a water area should not be waived.

Especially attractive is the attitude of the crabs in the aquarium their pronounced social and communication behavior. In addition, they are still largely unexplored and thus provide ample opportunity for observation.

Both crab species belong to the order of ten-legged crayfish and therefore have five pairs of legs: the first is equipped with scissors and therefore serves as a tool in combat, communication or food intake. The other four serve the word movement.

Striking is the vampire crab her bright purple or orange to red color. The adult animals are relatively small with a size of 10 to 30mm on average, but both sexes can reach a size of up to 50mm. The tank on the front body, the Carapax, has a rough surface and looks almost square from the top. The eyes of Geosesarma are long and their stems almost reach Carapax. The males can be distinguished from the females by the much narrower abdominal flap.

The fiddler crabs (Uca) are available in different colors, which also have only a small size of about 8 to 35mm. Striking is the large scissors of the male, which can sometimes make up to 50% of body weight. The other scissors as well as the scissors of the female are small.

How many types of these crabs are there? 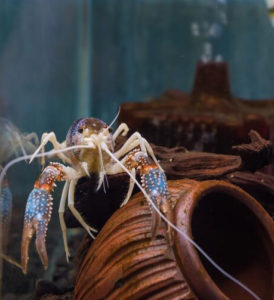 By 2009, 43 species of Geosesarma crabs were known. Formerly they were counted as the family of the square crabs (Grapsidae), but today they belong to the family of mangrove crabs (Sesarminae).

Particularly well-known is the Mandarin crab (Geosesarma notophorum), which is one of the most commonly available species in Europe.

Of the Uca crabs are known today 92 species, they belong to the family of Ocypodidae.

Both species belong to the suborder of the crabs (Brachyura), the order of decapods (Dekapoda), the genus Higher crayfish (Malacostraca).

What is the natural environment and home of the crabs?

The Geosesarma crab is mainly distributed in Southeast Asia, where there are even endemic species on many islands. This is mainly because the larval development of this species no longer takes place in the water and the current can not spread it.

The Uca crab is found on the shores of warm and tropical seas, where it likes to stay in mangrove forests or silt and sandwatts. Like the vampire crab, the crab is active at night or in the evening.

Both species form colonies in their natural habitat, but sometimes fiercely fierce during mating.

How do I feed the crabs in the aquarium? 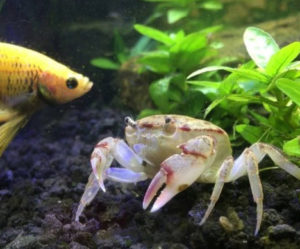 Basically, crabs are omnivores, but the vampire crabs seem to prefer carnal food, which they hunt themselves. Although crabs in the aquarium often offer plant-based foods, they are barely accepted by the Geosesarma crabs. In the aquarium they can be fed well with frozen food, vegetables, granules and tablet feed as well as crayfishes. From time to time they also enjoy an earthworm or snails, so live food.

The crab crab, on the other hand, takes both herbal and carnal food, which it finds and kills in its natural habitat (especially in the dry swamp area).

Special food for crabs in the aquarium can be found on the market. It is especially on lime-containing food, such. B. sepia shells to pay attention, as the crabs shed regularly.

Crab Attitude: How do I keep the crabs in the aquarium in line with the species?
There are some things to keep in mind when keeping crabs in the aquarium: First of all, it is important that both the vampire crab and the crab crab are semi-terrestrial, they live near the water, but they mainly live on land.

You can find lots of crab names in this link “CRAB NAMES“.

You can find lots of famaous crab names in this link “FAMAOUS CRAB NAMES“.

You can find lots of blue crab names in this link “BLUE CRAB NAMES“.

Female Cat Names that Start With the Letter B

How To Make Lovebirds Singing

Male Cat Names that Start With the Letter T

Male Cat Names that Start With the Letter B