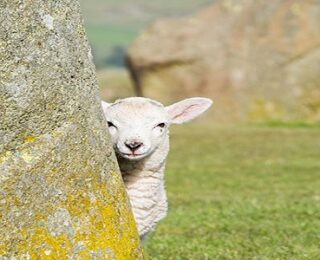 Derek the Sheep: Famous fictional character from the British sitcom, The Beano.

Dolly: Dolly became the most famous sheep in history when her birth was announced in 1997. She was the world’s first-ever mammal to be cloned. She was a genetically cloned offspring of three different mothers.

Famo Montauciel: You can name your pet sheep Montauciel to pay homage to the sheep that boarded the first ever hot air balloon. The name means ‘climb-to-the-sky’. The sheep flew alongside rooster and a duck. Even though they were slightly confused, all three animals landed safely.

Lance Corporal Derby: This Swaledale ram became the highest ranking sheep in the history of the British Army for his good behavior.

Meryl Sheep: Known for her extraordinary craft, Meryl Streep, is undoubtedly one of the greatest stars. This is a punny take on her name that will perfectly suit your best female sheep.

Methuselina: She was the world’s oldest sheep that lived for 25 years, nearly twice the normal life expectancy of a sheep.

Shaun: The leader of the flock

Female Cat Names that Start With the Letter K

Male Dog Names that Start With the Letter B