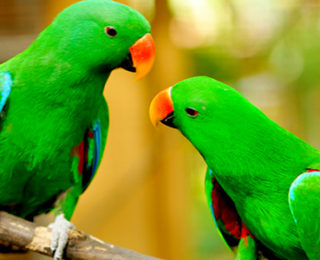 The Eclectus Parrot is a subspecies of parrots in general. People will be able to identify it from the other subspecies available out there by looking at their colors. For instance, a person would know that a particular Eclectus parrot is male if the color is emerald or bright green. On the other hand, one would know that this parrot is female if it has a red and blue or purple color.

In the time today, this specific breed of parrot can only be found in New Guinea and Australia. This is contrary to the 1980’s when they are considered as one of the most common types of parrot in the Moluccan Island. It has also been said that they are usually seen in forests that have formed in low land formations, but found in tall trees. 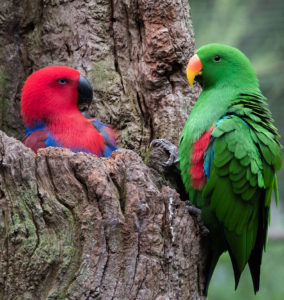 Even though an Eclectus parrot may seem like a weak and fragile bird, the truth is that it is otherwise. As a matter of fact, it is very strong when it comes to flying that it is able to maintain its height even in long flights. In addition to this, this type of parrot also never travels alone; it either flies by pair or as a group. When this bird flies over trees and different land formations, it is usually looking for food such as leaf buds, nectar, nuts and fruits. When evening comes, this bird usually flies for entertainment before gathering with a group of at least 80 other parrots. After doing this, all these parrots would eventually find a tree where they can sleep.

When it comes to the reproduction of an Eclectus parrot, people should know that they form a nest by creating a hole in a tree’s trunk. The eggs are guarded by the female parrot, while the male partner makes sure that the female is fed regularly and properly. This process is maintained for at least 28 days to make sure that the eggs hatch accordingly. After 12 weeks of staying inside the nest, the little birds will already be able to leave and fly on their own. 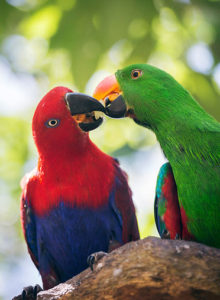 For those people who are planning to take care of Eclectus parrots, they should know that the most important aspect of doing this is by creating a bond with the birds. When this trust has already been created, it would be easier for a person to teach his/her pet parrot some tricks that will entertain them. One of the best ways by which these parrots will be able to trust its owner is for people to personally feed and raise them. This is a good thing to do to be able to shower the pet with love and care from the beginning.

With all these information about the mentioned species of parrot, it would now be easier for a person to understand and raise one in their own homes. As a matter of fact, even when a person decides to breed this particular species of parrot, he/she would not have a hard time in doing this.

Male Dog Names that Start With the Letter W

How To Treat Lovebird Molting

Male Cat Names that Start With the Letter Q

Male Dog Names that Start With the Letter T