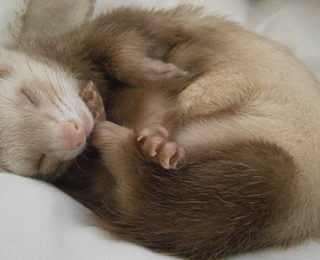 Ferrets are belonging to weasel family (Mustelidae) and have a relation with minks and badgers. Its scientific name according to the newest scientific evidence is Mustela furo. There is no data about the origin of ferrets. Ferrets are domesticated animals. They have been domesticated for about 2.000 years. They become pets in America since about 300 years ago. However, they are still not recoginized as a domestic animal in many places.

Ferrets can be your lovely pets 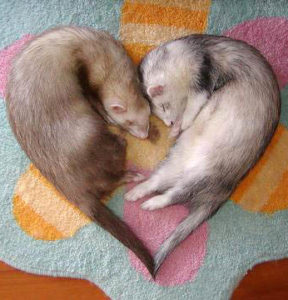 Ferrets are playful and fastidious creatures. They are active, gregarious and happiest in groups and curious as well. Ferrets sleep eighteen to twenty hours a day, and only wake up when they want to eat. They are most active before sunrise and sunset, and usually play virtually tirelessly. They like warm places to rest. They also like dance, prance, wrestle each other. They are cute, and act and react like two to four years old child. If you want to have a funny and curious pet, consider ferrets.

Ferrets can be your lovely pets. It is also a nice pet to be the friends at home. But you must be careful to treat it even if it is safe to the children. There is still a consideration of the danger that might be aroused if you have it as a pet. It can bit a little like cats. You have to keep it attended even for the children or the ferrets itself because both of them may play roughly. But still think calmly.

There is a fact that there is a rare case of the bite of ferrets to the children. Compare it with the dogs bite to baby that happen 5 times more than the ferret bite to the children. Don’t be afraid to keep it as your pets, because it is unique and different from other people pets. The usually have cats, dogs, birds, and so on, but you are unique with your lovely ferrets.

The Main Food for Lovebirds

Female Dog Names that Start With the Letter V

Female Cat Names that Start With the Letter S