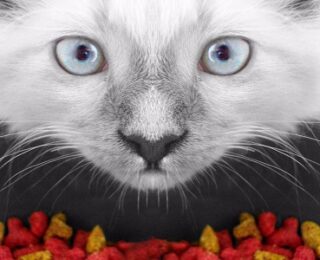 Advocates for being a conscientious healthy cat owner will always say to read the ingredients on your cat food. They say you should understand what your feline friend is consuming. However, if you’ve ever read a cat food label, you know it’s hard enough to pronounce a lot of the words, let alone know what they are and what they do. Food labels are a bad combination of high school chemistry class vocabulary and a deli menu. Here are 5 common cat food ingredients you’ve either never heard of or have no idea what they are for.

Tocopherols, sometimes labled as mixed-tocopherols, are chemical compounds that contain vitamin E. The chemical is commonly extracted from olive oil, peanuts, sunflowers and other oils. Vitamin E’s main function is that it acts as an antioxidant in the body. It also plays roles in muscle growth, gene expression, and some other neurological functions. It is harmless in regular doses and is added to many vitamin supplements moisturizers for humans.

Choline Chloride is simply an organic ammonium salt. It is also commonly called biocolina, lipotril or hepacholine. It’s primary use is as a nutrient for growth and development. It is commonly an additive in chicken feed, which allows them to grow quicker. A study by the National Centre for Ecotoxicology and Hazardous Substances concluded there were no adverse health effects on rats that were tested in the study. However human test subjects showed an increase in hypotension when given a high intake of choline chloride. Despite this, the component is considered safe.

Pyridoxine Hydrocholride is essentially a salt containing vitamin B6. It is found in nearly every cat food on the market today. Vitamin B6 is an essential vitamin that is commonly found in meats, vegetables and grains. Its primary purpose is to assist enzyme reactions to help break down foods. It also is involved with the immune system and brain development.

Copper sulfate is a basic mineral salt used to kill bacteria, algae and fungi. It can be found in nearly all big name cat food brands. It is also useful in solidifying dry cat food ingredients. Copper Sulfate is somewhat controversial as some unverified reports link it to cancel. It is commonly used in pool cleaners and in snail poison. However, SuperNutrition USA published a report that stated that there are no instances of any adverse health effects from copper sulfate and that copper sulfate is safe in small, normal doses. The study stated that it’s no more dangerous than any other vitamin or mineral.

Yucca Schidigera is a flowering plant found in desserts in the southeastern United States. The plant has many practical uses and was valuable to Native Americans. The leaves can be used to make rope and other durable materials. The fruit and flowers of the plant are edible and the seeds can be ground into flour. In cat food, its primary purpose is to reduce feces odors. It is typically only found in premium cat foods, including Blue Buffalo and Wellness CORE. Some pet owners are weary of this ingredient as few tests have been done to confirm safety.

Beautiful Girls with Their Dogs

Female Cat Names that Start With the Letter A

Male Cat Names that Start With the Letter G

My Cat is Scratching Furniture: What To Do?